Today’s post will be one of many down the road regarding the future of women in infantry roles.  My insider perspective of being a woman who served as a United States Marine is useful in this discussion, but not the only perspective.  I am more of an outsider on this topic, looking in with you all, and you must understand I do not speak as a subject matter expert.  I did not take on the challenges numerous women have since integration testing began. Nor did I participate in something as uniquely different  as female engagement teams the Marine Corps employed or the cultural support teams like the women featured in Ashley’s War during my time in.

For several months now you all know I’ve been caught up in my own civilian identity working a full-time job and attending graduate school part-time.  These responsibilities eat up much of my free time and sadly, my focus on the news has waned greatly since November.  My efforts to fully study the conversations about integration testing have been quite partial at best.  I am torn at times between wanting to be fully invested in the dialogue and struggling to also focus on other areas of military life and veteran challenges for my program.  I am interested though to see exactly how women’s roles progress in the military and will follow along as my current schedule permits.  There will be some positive (and like always, negative) results as the military adapts to its new expectations, but hopefully everything is skewed more towards the former.

For today though, I wanted to share my feelings on a recent article in the Marine Corps Times, the details being provided for your convenience in full below. 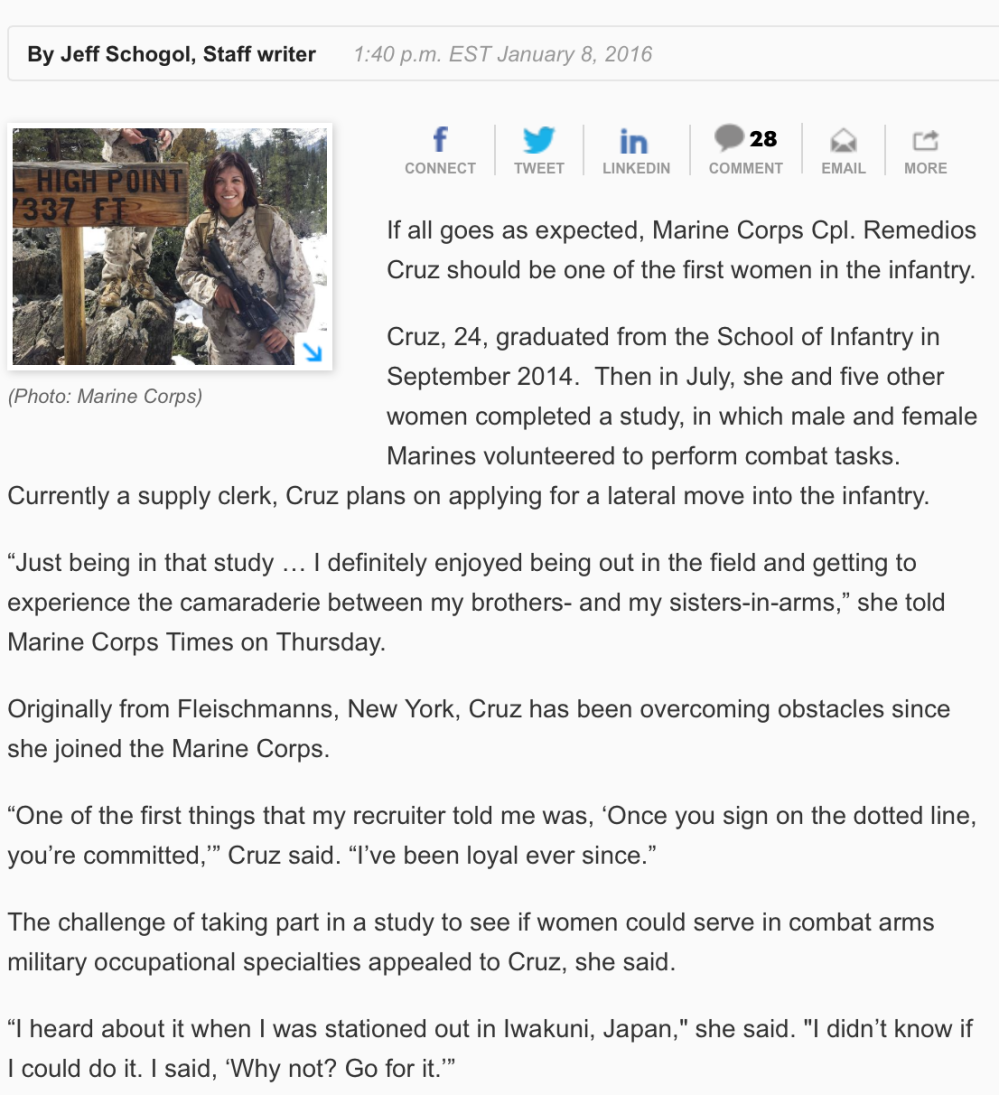 I am not one of those women who would have stepped up to the challenge Corporal Remedios Cruz did, which is why I find the integration testing to be so interesting. Before I served, I wrote a paper on the possibility of women in combat roles, but never thought Direct Combat Exclusion would be repealed.  For my entire life, women have not been authorized to serve in direct infantry roles.  When I enlisted, infantry (and some other military occupational specialities) was off limits, but I was not bothered or resentful I couldn’t serve in the infantry.  For anyone who knows me well, even if I was a guy, I don’t think infantry would be my chosen profession.  Instead, I found an equally (and always) challenging role for my life in being a Chemical, Biological, Radiological, and Nuclear (CBRN) Defense Specialist.  Like Cpl Cruz, I didn’t know if I had what it took to serve in my desired role, but I went out, tried, and successfully passed the standards set for that particular military occupational specialty (MOS).

It was through this choice (and completing many objectives) that other doors opened up for me and I served a greater purpose for the Marine Corps because I was seen as a Marine and not the female Marine.  Now, I wasn’t always so lucky to be see as a Marine first and a woman second, but we’ve discussed that scenario many times over.  I am proud of all the women who have tried the integration testing, even those who did not successfully pass the qualification standards.

I think what’s important for individuals–inside and outside of military circles–to see and appreciate is the devotion to duty expressed by service members attracted to infantry roles (and thus far, integration testing). A service member who wants to be in the infantry and can make the same standards will usually serve well in that role. The physical demands are greater, the teamwork coordination issues are more significant, and the weapons knowledge (and gear to carry) are heavier burdens.  You really must want it and that lifestyle.  While the article focuses on a single Marine in this case, each participant (and those in similar Army training) deserves respect for her participation.  Each volunteered with the full knowledge she could train (and potentially succeed) without necessarily EVER being bestowed the honor of serving in the infantry.

Regardless of where things go from here, I hope the lessons learned are intently studied for years to come.  A quick change is not always the best change, but baby steps should not be overlooked either.  All change starts somewhere.  I wish all the women who participated in integration testing the best at weaving that infantry training in their leadership.  I hope all the men who worked and/or work alongside these women appreciate the effort, spirit, and abilities of each woman who met the same standards or scored higher.  I will applaud from the sidelines, because I am not interested in accomplishing the same feats but I can appreciate the hard work and devotion went into these achievements.

Coming up here soon, I want to tackle a completely different topic and that’s the talk about integrating Marine Corps boot camp…stay tuned.

(SPOILER ALERT…I’M VERY MUCH AGAINST IT.)