When I considered prospective military occupational specialities back in 2003, there were a number I instantly ruled out.  I don’t recall the specific conversation details except informing the recruiter I didn’t want a supply or admin job.  So many women join these fields; I wanted to do something different.  Communications didn’t interest me either.  I liked the idea of combat camera because combat illustration appealed to me, but I didn’t have a portfolio created at that time.  As a woman, infantry was not an option back then but the repeal of Direct Combat Exclusion Rule in 2013 opened the option for testing.  I am proud of the female enlisted Marines who graduated School of Infantry training November 21, 2013.  These women will not be infantry Marines, despite their accomplishments, but they are I will have a serious discussion with you all another day about my beliefs, curiosity, and encouragement for women’s expanded military roles.  I don’t feel the repeal of the Direct Combat Exclusion Rule would mean so much to me had I not served my country.  However, I found a relatively good path for myself as a 5711, Nuclear, Biological, & Chemical (NBC) Defense Specialist. (Note: When I got to my first unit, 1st Marine Division, I found out NBC was changing to Chemical, Biological, Radiological, and Nuclear or CBRN to more accurately reflect the myriad of threats.)  My title was then CBRN Defense Specialist.

Like always, I will be honest in my self-assessment.  I was not the best Marine to enter this field, but I was significantly challenged by this path instead of taking easier options available to me.  My timidness got to me on numerous occasions, particularly in the realm of public speaking.  This issue is problematic because CBRN Defense Specialists teach other Marines how to use their chemical defense gear, clothing, and decontamination procedures.  Adding to my personal stress over public speaking was my discomfort wearing a gas mask .  I have quite the irrational fear of drowning and suffocating to death, so the gas mask’s restrictive qualities create an additional layer of anxiety.

I am a better public speaker now because I challenged myself in the Marine Corps.  I’ve developed better critical assessment skills because I know my strengths and weaknesses.  I know it’s my responsibility to seek self-improvement and to not set low expectations.  I have great rapport with supervisors and many of my peers from 1st Marine Division.  We are a privileged group of individuals to do such diverse training.  This work is and always will be important to protecting the lives of the Marines under our care.

Chemical munitions pose significant health consequences, up to and including death.  The New York Times March 25, 2015 article about the Army’s apology to veterans with chemical injuries is worth reading. 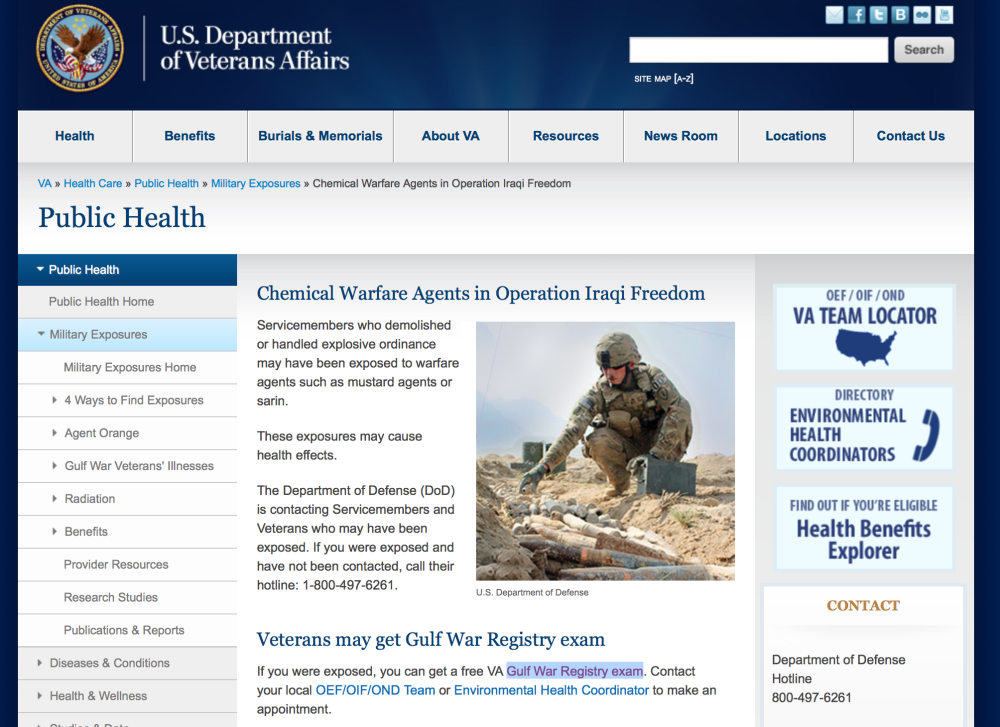